In grateful recognition of

many spontaneous and valuable services

rendered to my ministry in

several of which are herein referred to.

This volume is fittingly and appreciatively

Her loyal and faithful fellow-worker

as a perpetual Memorial to his Life and Work in his Master’s service,
and on behalf of the thousands of readers the world over, who have
received consolation from them.

May the message now given be of equal value to mankind in bringing
each and all to their desired heaven “Within the Gate.”

It is with feelings of deepest gratitude that I am now able to give to the world this third series of Leaves from the Autobiography of Aphraar. It is now over thirty years since Through the Mists went forth upon its mission—a mission which is far more popular to-day than when it first commenced. Seven years later, The Life Elysian followed; and now I have been called upon to record his arrival at THE GATE OF HEAVEN.

In passing the present volume on to my publisher, I am deeply and gratefully conscious of the fulfilment of an assurance given by the Master, when He said, “Every scribe which is instructed unto the kingdom of heaven is like unto a man that is a householder which bringeth forth out of his treasure things new and old.” In the present pages the reader will find himself invited to visit old scenes in the pilgrimage of Aphraar, but he will do so with new and larger powers of vision, deeper revelation, far clearer comprehension. Aphraar, in passing forward, meets with new teachers, who expound to him the old truths in the fuller light of new interpretations, not inconsistent with, but rather with a wider amplification than he has so far been able to grasp, so that he begins to understand the relationship of part to part in the expanding scheme of existence, and comprehend the use, meaning, and purpose of details which had hitherto proved to be mysterious stumbling blocks in the path.

Let me point out an illustrative suggestion of what I mean. His new teachers, Omra and Rael, carry Aphraar into the theatre of Allegory, where he is permitted to watch the progress of the great drama of life. In the shadowless light in which he is now watching the true unfolding, he is able to trace the exact point at which theological emendators have made excisions or introduced such confusions as make the existence of a priestly cult necessary to the subjection of humanity, and the perversion of the truth as it is in Jesus.

The first part of this drama of existence, according to the teaching of the Christ, is shown to Aphraar to consist of three acts, beyond which he has as yet no power to penetrate its mystery:

ACT I.—The Mortal or Infancy Stage of Being. The child not yet able to discriminate between the evil and the good, is in itself sinless—“Of such is the kingdom of heaven.” It is, however, presently able to understand “Do this,” or “Don’t do that,” and is so far responsible for disobedience, and consequently becomes liable to chastisement and correction. The falling of the curtain, called Death, is not the end but simply a change of scene introducing:

ACT II—The Scholastic Period or the Youth of Existence. (This is the great region of theological fog, controversy, and confusion, variously called the Intermediate State, Purgatory, or the Seven Spheres). It is in reality the Schoolroom in which the soul is educated and prepared to take its position in life as a Son of God. In another Allegory of the Master it is represented as the harvest field, where the soul is made to reap the harvest of its infantile actions; or in a third, it is audit time where the soul is made to report and balance its account for the use of its opportunities in obedience or otherwise, and be subject to such commendation or penalty as the balance shows. But in the dispensation of justice an infallible and all-loving Father “who will have all men to be saved,” makes the award.

ACT III—The Manhood of the Soul. The necessary educational stage past, and the soul having been purified from the infirmities of the flesh, it enters upon its inheritance as a Son of God—a condition so markedly different from what has gone before that it is shadowed forth in two strangely varied allegories: “Ye must be born again,” and “an espousal to the Christ,” or yet again the Master pictures it as the reaching home of the Prodigal Son, and the bestowal of the ring, the robe, the kiss, and great rejoicing.

In interweaving this allegorical teaching into the actuality of Aphraar’s experience the greater part of this volume is devoted, and the consistent figure adopted is that of the second birth as presented to Nicodemus. Here I venture to suggest that whether Rael or Omra takes up the parable to instruct their pupil, the reader will find each of them to be both interesting and consistent in following in the steps of the Master in whose service they are working.

Of course, I am prepared for some of my readers shrinking with something like horror at the thought of Aphraar’s second birth taking place more than forty years after he has thrown off the mortal body, but this is not the first breath of theological heresy that has been wafted across our records from the plains of heaven, nor is it anywhere demanded in the Bible that the transition must be obtained during the terrestrial stage of being, and yet Paul was authorized to declare that “As in Adam all die, even so in Christ shall all be made alive.” It is therefore obvious that if the regeneration necessary is not received here it must be acquired there.

Having been privileged to write the following records under Aphraar’s direction, and thereby knowing something of the difficulties he encountered in taking the step, it would be an easy matter for me here to say what his advice would be to each and all of his readers concerning it, but I will not anticipate. It is best for him to unfold his own story, and in his own way show how impregnable are the defences that ensure the kingdom so that “there shall in no wise enter into it anything that defileth, neither whatsoever worketh abomination, or maketh a lie.”

THE HEAVEN
and
EARTH
SECTIONAL DIAGRAM 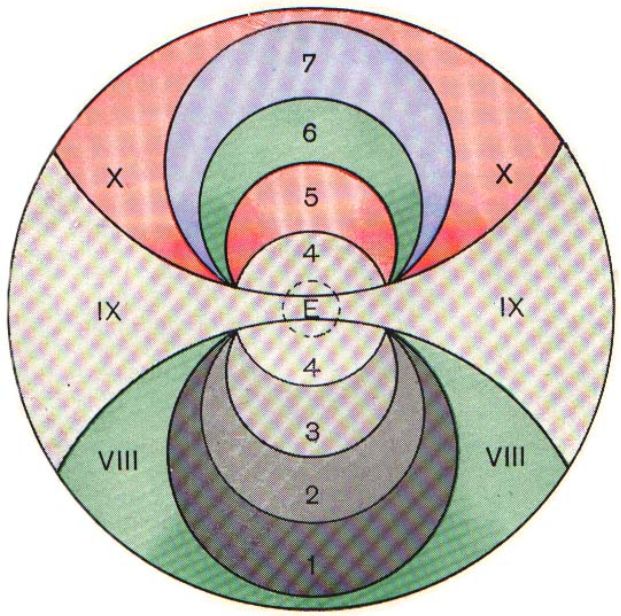 EXPLANATION OF THE DIAGRAM

The outer circle indicates the position of the Psychic Sphere. The ‘firmament’ or heaven of Gen. i, 8. This, as described in the following pages, embraces every provision for the reception and maturing of the newly-born soul until it reaches the Spiritual condition of a son of God.

E. The Earth. Its position in the Physical indicated by the dotted circle.

I–VII. The Seven Spheres, or Intermediate State. The Schoolroom where the youth of the soul is passed in Spiritual preparation.

VIII. The location of the uncultured, or “nations that forget God,” in which they are suitably instructed and prepared.

IX. The Sleep State, where the sleep-life is spent by all mankind in communion with the departed. (Job xxxiii, 14–18.)

X. The Great Nursery, where children who pass away prior to birth, or before they “know to refuse the evil, and choose the good” (Isa. vii, 16), are developed and educated.

All these states are Psychic or Intermediary between the Physical and Spiritual, as the twilight divides the light from the darkness in the natural world. The first Spiritual Sphere lies beyond this circle and is attained by “the Second Birth” (John iii, 3) as set forth in the following pages.

Through the Mists The Life Elysian The Gate of Heaven

Status of the Audio Recordings

Through the Mists has been recorded through Chapter 12. You can access the recordings so far by clicking here.

To support this site

If you would like to support this site or express gratitude with a money gift, please click here. A Paypal screen will open. Many thanks.